Presentation of the Chilean Centre for Geopoetics Studies

I. Chilean Centre for Geopoetics Studies

a) Themes of Work

An old french documentary film was called “Chili, le pays du malheur”. It caused a big impression, because there were not many films about the country. In many ways, it was true. The great landscapes, their purity, as if they were just borned, it is so because earthquakes, tsunamis, volcanic eruptions, andean floods, literally renew those landscapes once in each generation. A geophysicist said that this planet is still in construction, and that Chile is the last phase of it. After that, the earth would begin to die. The extremes are violent in this country, that is why international studies about life in other planets, concentrate in two places, Atacama as the driest desert and the chilean area in the Antartic where ice is never liquid.

How do you live in such a country? We say that as a pagan, living each day as the last one, or as a mystic, in full conscious of how everything lives and dies continuously.

But we, as a group, think that architecture and local cities should be in line with that reality, following the famous words of Hölderlin: “Poetically man lives on this earth”…

b)  Mission of the Centre

Through architecture itself, or through literature and essays, we’ve been working in a latinamerican context (mainly Bolivia and Columbia, besides Chile), a geopoetic view of the region and geopoetical propositions to inhabit very delicate places (Atacama, Eastern Island, Araucanía, Patagonia), but also the main cities: so chilean lanscapes may survive and keep on giving us what many persons feel when they move around: that they are the firsts to walk there, in this untouched territory, where the energy of earth is still raw. For examples of this ideas, you can visite the website www.cazuzegers.cl and go to “Publications”, and there open the book “Cazú Zegers, prototipos en el territorio”. In the same site you can visit recent Works, as the Hotel Tierra Patagonia, an example of a contemporary geopoetic architecture. Zegers’s Works are considered among the most interesting of people who followed the thesis of the Escuela de Arquitectura de la Universidad Católica de Valparaíso, which was borned in the ‘60’s with a geopoetical orientation.

c) History of the Centre

We had a big and nice house a great friend lent us during five years, the “Observatorio de Lastarria, a place to watch Chile”. Along that time, from  june 2006 to December 2010, we opened 18 exhibitions of visual arts and presented more than 100 events; films, poetic lectures, musica and speechs of anything about Chile: birds, water, architecture, toponimia, urbanism, poetry, geology…

One day, during that time, Georges Amar, wandering in the neighborhood, saw our house, liked it, walked in and read in the wall that is was a place for geopoetic studies and events. Amazed, he asked for information and told us about the coincidence, in the same word: geopoetics.

And he told us about Kenneth White and the Institute, we started a correspondence with Kenneth, he sent us some of his books and some of the Cahiers de Geopoetique, and then it was our turn to be amazed: things in common, things unknown, a wide space to move on and discover, in a world net.

So, when we left the house, we focused in work and studies, and since the year 2011, we affiliated to the International Institute of Geopoetics, as the Chilean island in the related archipielago.

The virtual space became important; with weekly texts, about geopoetical subjects from all over, but mainly southamerican subjects. It was a big window during two years, with hundreds of readers from 14 different countries; you can still read those texts, all of them, in http://blogelobservatorio.blogspot.com

Because of personal works we had to interrupt the weekly blog. Partly, because since the year 2009 we have been publishing texts in La Panera, the art magazine with more diffusion in Chile, nearly 25 thousand copies; in two opportunities, very directly, with articles about Kenneth White and the Institute. These can also be read, all of them, in www.lapanera.cl under the title “La columna de Miguel Laborde”.

The year 2014 was special, since our president, the architect Cazu Zegers, went to Paris for the meeting of Geopoetics and cities, with a presentation about the region of Araucanía, in the south of Chile.


With this map and the three pdf documents presented below, discover the activities of the center : 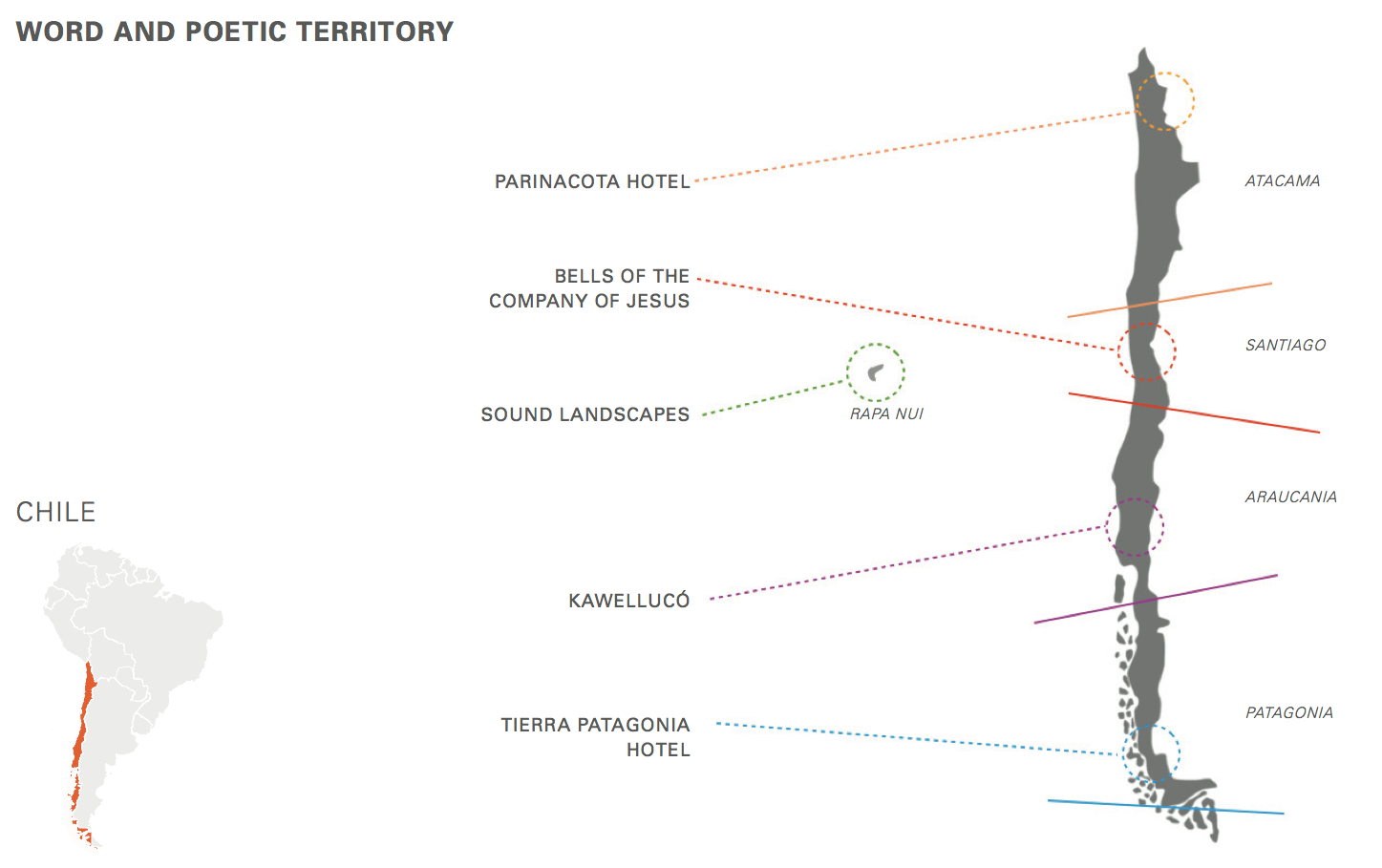 The year 2015 the architect Gonzalo Schmeisser  — who has studied the geopetic ideas — from here and there —, with two colleagues opened a website dedicated to architecture and landscapes, working with another group of related ideas. May be visited in www.landie.cl.

The poet Cristián Arregui coordinates since the year 2014 the activities of the Grupo Geopoético de la Patagonia, whose headquarters are in the chilean city of Puerto Aysén. Intense is the environment, of mountains, rivers, the rain, and also the human dwelling in the wooden houses around the fire of the stoves. Each element, in its condition, untamed, is the center of a cosmos full of life.

The group is also formed by Johanna Contreras (teacher and weaver), Tania Morgada (photographer), Cristina Pustela (visual artista), Pablo Lema (visual artista) and Rubén Álvarez (sociologist). In Kenneth White, Régis Poulet and Miguel Laborde — among others — the group found companions and guides in the paths to drive to dialogues with the earth; exercises and workshops are developed towards the restoration of a deep and intense relation with the Earth.

Cristián Arregui is also director of the Provinciana magazine, a publication of the publishing house of the Universidad de Valparaíso, wich also works the link between the Earth and the Word, paying special attention to the virtues of staying in the province.